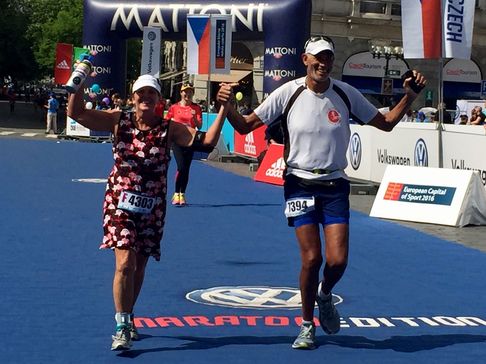 Catherine started running after her husband died. Her brother, who is also a long time marathoner, saw the downward spiral and thought that her training for a marathon would be a very healthy distraction.

She had already run 11 marathons and several half marathons before I met her.  I thought I would impress her if I ran a marathon myself. I enlisted her help in the training, but one marathon was not very impressive to her. After 64 marathons, a 50 miler at the age of 50 and an ironman back in 2011, Catherine is still not impressed. She now has 88 marathons and she says she will be impressed if I can beat her fastest marathon time. Since I am not getting faster, her Boston Marathon qualifying time will forever remain intact.

When and why did you decide to you were going to run a half-marathon or marathon on all seven continents?

Back in 2014, I had to have open heart surgery to replace my leaky Aortic Valve. I was determined to get back to running marathons. Catherine and I crossed the finish line hand in hand during the Berlin Marathon merely three months after my surgery.

Catherine was diagnosed with Early Onset Alzheimer’s about the same time and we decided that it was time for both of us to retire. We sold our home became peregrinates, (travel or wander around from place to place) and began what is now our three-year journey to run all over the world. As a goal, we selected three running milestones to accomplish over the next several years.

Our motivation is our desire to achieve these obtainable goals as we continue to run all over the world. I write about all our travel adventures and how we have dealt with our health issues over the years. I usually post once a month at PlayHard-HaveFun.com, which is also our motto.

Many have said that life is way too short and we have decided to see as much of the world as possible. It turns out that the stimulation of travel, socialization during tours with Marathon Tours & Travel and others, along with continual exercise has proven beneficial to both of us.

Often we say that the last race that we have run is our favorite. The most memorable is the Athens Greece Marathon back in 2010. It was the 2500th running of that event going back to

490 AD when Pheidippides ran from Marathon to Athens and all the countries in the world were represented.

Catherine and I were approaching running this marathon over five hours and neither of us were ready for that slow time horizon to be broken. We still have the photo finish of us crossing hand in hand, once again, but it did look like I was dragging her across the finish line as she was completely airborne.

Africa for me and Antarctica for Catherine.  All my life I have been scared to death of wild animals and the thought of living and running amongst them was a fear I had to concur. Catherine had a similar fear concerning crossing the Drake passage twice since she has a tendency to get seasick. We both reached down deep as we do when running a marathon to make both of these trips very enjoyable.

What is your favorite part of running and traveling?

Meeting and reuniting with like-minded people as we run all over the world and the especially the stories we can tell others.

Where we are right now. We try to run or take long walks everywhere we go. It is the best way to sightsee. We end up seeing places and things that would be overlooked if we were traveling by car or bus. Even if we are on a cruise, when the ship stops and everyone else are off on excursions we put on our running shoes and either go left or right off the dock.

Catherine and I are very goal oriented. As soon as one is achieved we will come up with another one. We no longer compete against each other or for that matter, others, but always set obtainable goals. We both cherish the moment that we cross the finish line hand in hand.

Realize that it is mostly mental. Training is very important and making sure you do not injure yourself in the process. It is critical that you listen to your body and take time off from the training plan, if necessary. Pick a marathon near your home so you can train on the route but if that is not possible I recommend the Chicago Marathon for your first marathon. The course is flat and the fans cheering you on are fantastic.

Catherine and Tony joined the SCC in September of 2014 and are Gold Members.  At the 2017 Antarctica Half-Marathon they both earned their Seven Continent Club Finisher medals!