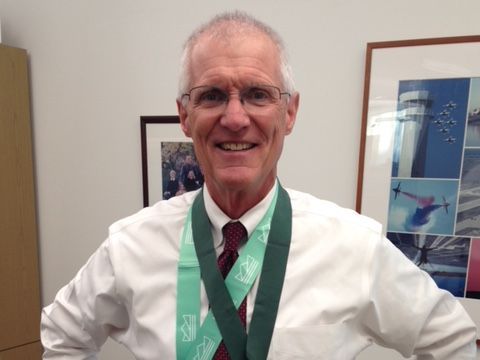 I have been a runner since 1974, when I signed up to climb Mt. Rainier with my best friend from HS and College.  I started running about three months before the climb, and got hooked.  I lost weight, got my body in shape, and enjoyed healthy eating.  I ran a lot of 5k's and 10k's after the mountain climb; my longest run each year was the 8-mile Dallas Turkey Trot on Thanksgiving Day until I turned 60, and then told myself it was time to step up my game.

I ran my first two marathons in the fall of 2008, and then joined the RunOn! stores marathon training group in Dallas in July 2009. With the help of RunOn!, I have now run 30 marathons, including all the Abbott World Marathon Majors and all seven continents.

With a few races under my belt, I put my name into the NYC Marathon lottery for 2011 race in and low and behold, my name was drawn!  Following NYC, I ran the Bank of America Chicago Marathon in 2012 with my son Michael.  Shortly after Chicago, I was flipping through the magazine they had given me at the race, and I saw the page on the World Marathon Majors, thus this became a goal.

Following my first international marathon in Paris with my son Lee (April 2013), I came across Marathon Tours & Travel who could help get me to Berlin.  In Sep 2013 I ran Berlin, followed by joining them for London in 2014 and then Tokyo in 2015.  Boston was left, so I accomplished this in April 2015 as a charity runner for Mass General Hospital.

With the ABBOTTWMM done, I realized that I had already run races on three continents (North America, Europe, and Asia).  So, why not work on the other four continents?

I was fortunate that as an SCC Member, I was able to be moved from the Antarctica waitlist to the confirmed list for the 2016 tour. This time my youngest daughter Olivia jumped at the chance for a two-week trip.  Next up with Marathon Tours & Travel was the Amazing Maasai Marathon in northern plains of Kenya in July 2016 and then Easter Island RapaNui Marathon in 2017.  I completed my quest of the seven continents with my final one… Queenstown New Zealand this past November.  Now completing my tenth year of marathons, I achieved my goal I set a few years ago of “7 before 70” before my birthday on December 10.

How many marathons and/or half-marathons have you run?  What is your favorite race and why?  What race did you learn the most about yourself?

Queenstown was my 30th marathon.  It’s hard to pick one marathon as my favorite.  Antarctica ranks as the best trip I have ever taken; period!  I loved our time at sea, sailing through turbulent waters, and exploring the ice-capped continent with penguins, seals, whales, and birds uniquely designed for that frigid environment.  Paris, Berlin, Tokyo, Havana, Kenya, Easter Island, and Queenstown are each such fascinating destinations; I don’t think I would have ever planned to make those trips without running as the objective.  And along the way, I learned that there are caring, friendly people all around the world; each with unique backgrounds, cultures and heritage.  With patience and tolerance, we can all enjoy this planet and use its resources wisely.  And additionally, there are peoples around the world who need our help and are so appreciative when we give it.

Running keeps me young; and I love the Marathon Tours & Travel trips where we see familiar faces over and over again as we criss-cross the globe.  Runners make great friends for life!  We instantly have common interests to talk about, and we cheer and encourage each others’ accomplishments.  Although I’ve run in many remote or rural locations, I like to run in the cities, where people-watching abounds!

Focused.  I’m not fast, but I’m focused on achievement and accomplishment; and I’m committed to doing it right once I take it on.

As Nike says, just do it!  Take the first step.  Your health is so important to your family; do it for them and do it for you.  It’s a lifestyle decision; you’ll enjoy the healthy eating, body mass will come down, and you’ll feel so much better about yourself mentally.  Start with a run/walk around your block; then a slow jog a little farther next week; then run a mile at the track, and watch as you transform physically and mentally.  Then join a running group.  Most groups will have different paces they train at.  Choose a pace that is conversationally comfortable for you.  Great marathon runners come in all shapes and sizes.  Its dedication to our sport that sets us apart, and I’m convinced that running is a team sport.  We encourage and support each other.