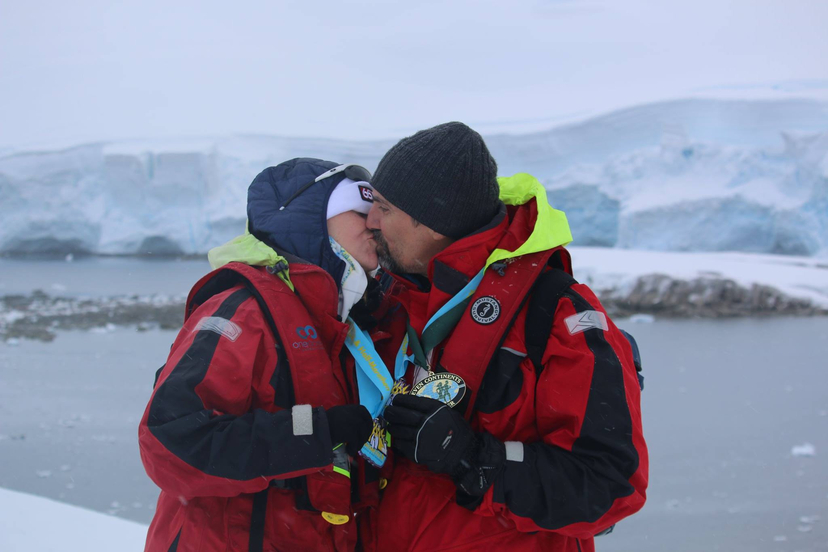 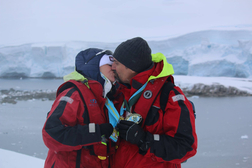 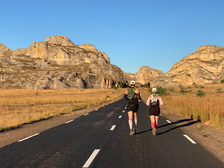 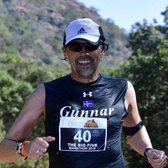 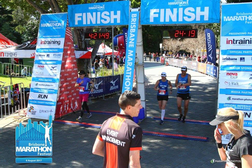 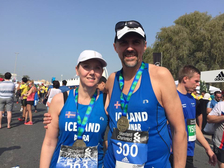 Thora: In the spring of 2008, a good friend had the idea that we would join a newly established running club at our work place. The goal was to be able to run 10 KM in the Reykjavik Marathon later that summer. We managed to finish the run with great success.  There was no looking back. Since then running has become a vital part of my daily life.

Gunnar: I often say that I started running regularly on my 41st birthday (April 10, 2008) when I took a day of work and ran the half-marathon distance for the first time. In 2006, I went through chemotherapy for blood cancer. I had gained weight during the treatment and had a hard time getting the extra kilos off. Secondly, with memories of the time before treatment when I had been aware of how the onset of the disease had negatively affected my physical condition, it occurred to me that this might be a good opportunity for me to monitor just how strong and sustainable my recovery could be.

Thora: It is my beloved husband, Gunnar, who is fully responsible for the fact that I began to think about the idea. From 2008 until 2016, I mostly ran 5 KM and 10 KM competitions, and few half-marathons. Then my friend and I decided to step up our training so that it would be possible to run a full marathon. We ran Munich in October 2016. Gunnar ran with us and we finished hand-in-hand!

At this time, Gunnar had made a decision to run on all seven continents and had finished all but Oceania, South America and the Antarctica. We had Dubai, Brisbane, and NYC on our 2017 schedule so if I ran those, then I would only have three continents left. In addition, we were planning to run in South America in 2018 and Antarctica in 2019, so in fact I would only have one more to finish to become an SCC Finisher.  I bought the idea and we finished my seventh continent together this June in Madagascar.

Gunnar: It was in an airplane flying from Tokyo to Oslo in Norway in February 2015. At that time, I had just finished my second continent in Asia and I was scheduled to run in Chicago in the autumn that year. I thought I would have run a marathon in three continents and started to think about the possibility to run in more continents. When I was back home I started to browse the internet and found out that it was possible to run a marathon in the Antarctica. The dice was rolled and I applied for membership in the Seven Continents Club!

Thora: Two and a half years after my first marathon, I have run seven marathons on seven continents and still have to run a marathon in my own home country, Iceland! I have run eight half-marathons and a few trail runs up to 32.7 KM.

Gunnar: I have finished 40 marathons and 5 ultras. The longest was a 100 KM run in 2011. Since early in my running career, I fell in love with the marathon distance so I have not run many formal half- marathons. My guess is 5 to 7 in total.

Thora: My first marathon in Munich will always be unforgettable. Probably for being the first but also because of the great experience we had running this with our friend from start to finish.

I also have to mention the half-marathon in South Africa, The Big Five. It was absolutely unique to run there, to dance with the natives at the water stations, and then run amidst all the wild animals and even have to stop were a heard of antelopes and zebras had do cross the running course during the race.

Gunnar: I have to name two races that are very different. The first one is the Paris Marathon. I have run this race twice and when I did it the first time, in 2011, it was my third marathon and the one I set my PB. At that time, I was practicing for my 100 KM run later that summer so I was running up to 150-160 kilometers per week. Everything went as in a fairy tale and this was maybe one of my easiest marathons ever. I ran two perfect splits and still today, the time in the first half of this marathon is my best time in the half-marathon distance.  The time in the second half is still my second best time! Seeing the Eiffel Tower getting closer and closer when you run on the banks of Seine is fantastic!

The second run I have to name is the Big Five marathon in South Africa.  The encounter with the wildlife is amazing. Best to describe the experience is to quote my own blog: https://garmur.blog.is/blog/garmur/entry/2176198/ (in Google, right click to ‘translate to English’)

Thora: I think I have to say that the Antarctica run was the most difficult of all my marathons and there I learned a lot about myself. It is the only marathon were I really gave it a thought to throw in the towel after I finished the half-marathon distance. The hills were difficult and in my training, I had not practiced to run in the hills enough. However, after the water stop and some nourishment at the half- marathon marker, I said to myself, “Thora you did not travel to the other side of the globe to quit!” After some encouragement from Gunnar, we kept running and continent number six (6) was conquered!

Gunnar: I will have to say that the most challenging marathons that I have run – and maybe therefore I have learned the most about myself – are the last two I ran earlier this year in the Antarctica and Madagascar.

As members of the SCC, I know we have to book the Antarctica trip with up to three years in advance. During the time from booking and until the trip, many things can happen. In my case, the blood cancer I was diagnosed with in 2005 that had been in remission, had returned. It was foreseen that I would have to undergo treatment again in the very near future. The question was if I would be able to run the Antarctica Marathon before treatment. It was very close and it wasn’t until the day before I was to depart for Antarctica that I got the green light from my doctor. When we arrived in Antarctica and I saw the course, I was not sure if I would be able to run it within time limits. My blood cancer means that I am very low in hemoglobin and hills are my worst enemy. This year the course was six trips back and forth towards the Uruguay station and with almost constant hills up and down. Since we had six and half hours to finish the race, the plan was to try to run the course at an even pace and try to run each loop as close to an hour as possible.  This would give me an “extra” half hour in the bank. The plan went smoothly and we managed to finish just under six hours. The lesson learned is never give up, but try to adapt to whatever situation that might challenge you.

The second race I will have to name is the Madagascar Marathon. At that race, Thora was finishing her seventh continent. I had started my chemotherapy, however was able to travel with her to Madagascar. I had in my head the idea of trying to run with her at least the first half. When it came to it, I was in tolerable state after the first half and decided to run with her the rest of the distance. At 27 KM, I found my limit. I was not able to run one more step. But, I could walk. So walk we did. This was a new experience for me since I have never had to walk in marathons except the steepest hills. I have learned to adapt. We had seven hours to finish the marathon and when we started walking, we had three hours left. Those three hours were taken to good use and we finished just under seven hours. I will have to admit that it wasn’t until in the very end that I counted this one in my head!

Thora: Planning trips to new and unfamiliar places and experiencing them on the ‘run’ gives you the opportunity to get to know and enjoy them in a completely different way.

Gunnar: Running and travelling is a wonderful combination. One of my favorite things to do is to browse the internet and look for exciting runs in different countries. Sometimes it is a special run that catches the eye, or a special country or a city that I want to visit. Of course, sometimes when you chose a run you have in fact chosen a series of runs like when you are collecting the seven continents or the six WMMs. That is exciting too because then you have a goal to follow for several years and it is very fulfilling to be able to do so. In between, you can perhaps add one or two more runs that are special. In my case, I have been collecting the capitals of the Nordic countries and have now finished all but Helsinki in Finland.  I have run in 19 countries and counting!

Thora: My favorite places are Rome, South Africa (the Big Five), Antarctica and running in the nature in Iceland.

Gunnar: I love to run in Paris. Barcelona and Rome as well. Stockholm in Sweden is a beautiful city to visit and run in. Faroe Island was a pleasant surprise. And Antarctica - it was magical. The pristine nature and the penguins was unlike anything else.

Thora: Patient and will never give up.

Thora: Start slowly and run at your speed. Listen to others who are more experienced and adapt to what suits you. When you start competing, remember to run so that you feel comfortable and can enjoy the race.

Gunnar: One step at a time. One practice at a time. Don’t overdo it. Try to be in your comfort zone. When the time comes, you will love to challenge yourself a little.  When that time comes, don´t forget you in your enthusiasm. Remember that rest is as important as the practice. There are no short cuts...you will have to put in those miles.