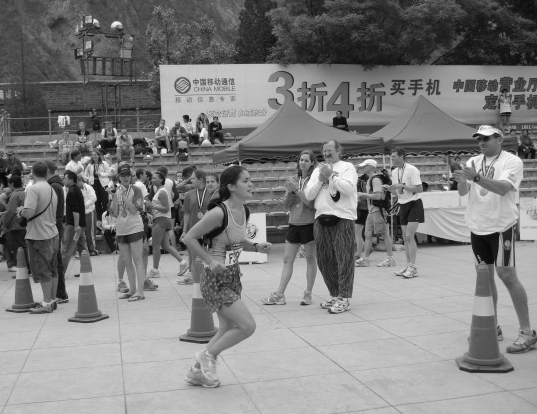 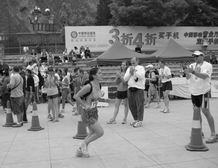 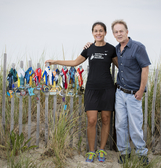 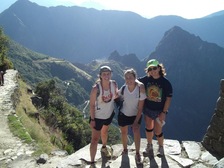 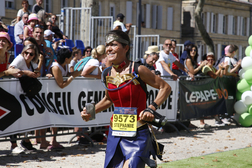 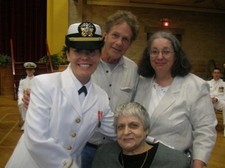 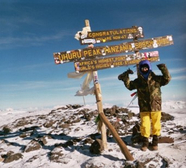 What made you start running?
I had asthma as a child and could not participate in any sports until age 12, when I got into recreational softball and soccer.  I was not coordinated enough to stick with either sport in high school, so I took up cross-country freshman year.  I ended the season early due to shin splints, but I returned sophomore year and stuck with it. By senior year, I was captain of my team and earned the Massachusetts Atlantic Coast League Sportsmanship Award.

When and why did you decided to you were going to run a half-marathon or marathon on all seven continents?
I ran my first marathon (Cape Cod Marathon 2004) while attending Norwich University, the private military college of VT.  Then I ran my second marathon (Marine Corps Marathon 2005).  By the time I ran my first international marathon (Great Wall 2006), I was hooked on the 26.2-mile distance.  I took a couple of years off from long-distance running while serving active duty in the U.S. Navy, with one deployment to the Persian Gulf in support of Operation Enduring Freedom/Global War on Terrorism.  I went on to run a handful of half-marathons and marathons, but my commitment to run a marathon on every continent did not begin until I completed the Kilimanjaro Marathon (2010).  Upon reaching the summit of Mt. Kili, I had frostbite in my hands, but I loved the challenge of traveling, meeting likeminded runners, racing all over the world, and pushing my body to the max!

How do you stay motivated through all those miles?
I think of my dad, Larry, who is a polio survivor whenever I am out on a long-slow-distance (LSD) training run.  He missed the polio vaccine by six months when he was younger, and due to a disabled leg, scoliosis, and other health complications, he has never been able to run himself.  He is very proud of my accomplishments of outgrowing asthma and serving in the military, as well as earning my Bachelor’s and two Master’s degrees.  Running marathons on each continent is just icing on the cake, and he loves to brag about me.

What is your favorite race and why?
I get asked this question a lot, and I always answer that I don’t have a favorite. They are all unique and special in their own way - with many memories made driving all over the country, flying to random airports on three-day weekend sprints to complete 1-2 marathons, and then jet home for work/school by Monday morning.  The laughs (and quarrels) with friends who ventured with me for the longer trips (4 marathons in 1 week, 5 marathons in 5 days) are priceless.  If I had to pick a favorite, though, I’d say Chicago (2016) because it was my 50th state, and my parents (who had never seen me complete a marathon before) flew with me for the weekend to give me a big hug at the finish line.  Bank of America did a piece about me, and a photographer came out to the Cape to capture me with all my finisher medals.  Having my dad in the photoshoot, at the race finish line, and sitting next to me at Wrigley Stadium watching the Chicago Cubs play in the post-season (later to win the World Series that season) was really, really special.  I’m a Red Sox fan all the way, but I’ll always root for the underdog. (SMILE)

What race did you learn the most about yourself?
I completed the Inca Trail Marathon in 2011, and it took me almost 11 hours.  I, along with another young woman, had come down with violent food poisoning and could not keep food down until the night before the race.  The race director gave me the option to start the race and back out at any time along the course.  As you may know, the elevation profile of the Inca Trail Marathon is equivalent to climbing up and down the Empire State building 10x (with a peak elevation of about 14, 000 of feet at a point called “Dead Woman’s Pass”.)  It was here that I was scaling the rocky terrain on my hands and knees, telling the other runners who passed me by that I felt so weak.   Fortunately, my roommate Fiona was a nurse, and she decided to stay with me at the halfway point.  Towards the end, we caught up with the other woman, Kate, who was recovering from food poisoning, and we crossed the finish line together as “the three musketeers.”  True teamwork.

What is your favorite part about running and traveling?
A combination of meeting new runners from all over the world (I ran the Antarctica Marathon in 2014 with the blind man Hein Wagner from South Africa), taking in the beautiful landscapes (and witnessing very curious wildlife up close), and interacting with the locals (whether volunteering time at an orphanage in Tanzania, donating supplies to hurricane victims in Puerto Rico, or embracing the heritage of Aborigines in the Outback) - I love it all!  I have gained great life perspectives from running and traveling, in addition my time in the military.

It doesn’t have to be a race, but what is your favorite place/city to run?
I served active duty in San Diego/Coronado, and so I enjoy returning as a civilian for a “trip down memory lane.”  In addition, the weather is always fabulous (99.9% of the time)!

What word would your friends use to describe you?
Driven.

What words of advice would you give to someone who is training for their first marathon or half-marathon?
As a certified running coach and personal trainer, I give a lot of advice based on personal experience.  One “nugget” of knowledge that I share a lot is, “enjoy the journey”.  The marathon is not just about race day… It is the entire training process, dedication, and sacrifice that goes into it.  It is the person you become through the gritty miles and forced smiles.  People say ‘Life is a marathon’ as a reminder that it is one step, one mile at a time.  Don’t take any of them for granted- the good AND the bad- because they’re too precious to waste.