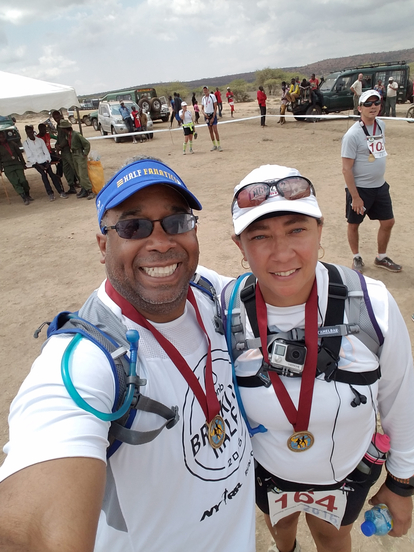 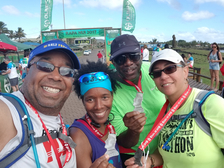 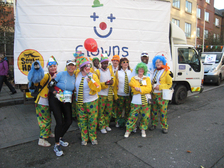 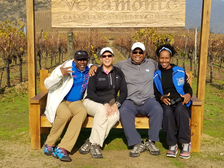 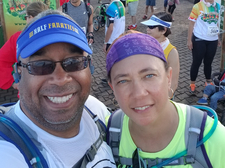 What made you start running?
James:  I started running in high school doing the 300 meter low hurdles, 800 m, mile and 2 mile relays.  My team won the state champion title two years in a row and were always in the hunt for a title. My running continued in college while playing football.  After leaving college, I stopped running and picked it up several years later while pursuing a career in law enforcement.  I was like Forrest Gump - running and getting my miles in without the right equipment, but I was out there.

Lois:  I became interested in running after moving to Chicago in 1999.  I joined a tennis club to learn the game and to meet people in my new city.  After meeting James, I tried to keep up, registering for 5k races, without much conditioning.  I was guilty of starting fast, running out of gas at about mile 1 and doing a lot of walking the remainder of the race.  After several attempts to complete a 5k on my own, I joined a gym, created a plan, which included gradually completing a walk/run program.  I was so excited when I was finally able to complete a 5k.  At that point, I was hooked.

When and why did you decided to you were going to run a half-marathon or marathon on all seven continents?
James registered for the 1999 Chicago Marathon.  Race weekend, we made our way to the packet pickup and expo.  Of course, we walked around the expo and were surprised by the various offerings at the booth.  That Expo was our first introduction to Marathon Tours & Travel.  After running two races (Dublin and Berlin) with Marathon Tours & Travel, and meeting so many interesting people and learning more about the Seven Continents Club, we set our sights on this goal.  At that point, neither James nor I knew anyone who had completed a race on all seven continents.  Although we completed full marathons in both Dublin and Berlin, Jacqui Kaufman helped us realize the half-marathon distance was a more realistic for us to achieve this goal.

How do you stay motivated through all those miles?
James:  For me, the accomplishment of finishing keeps me motivated.  I visualize the race and crossing the finish line.

Lois:  I love the training, especially when I am able to train in a group setting.  At the end of the day, for me, running is social.  I have met so many great people through the sport of running.  When the miles are long and it’s hot and/or raining, I know I can count on my pace group to show up to keep each other going. We’ve both had great support by connecting with organizations such as CARA in Chicago, NBMA, Black Girls Run and Black Men Run.

Lois:  I completed 11 marathons and 38 half marathons

What is your favorite race and why?
James:  My favorite half was Columbia Gorge in Oregon.  I loved the smallness of the race, the beauty of the foliage, running along the Columbia River.  The race organizers are very friendly to the runners. My favorite full was the NY City Marathon because of the size of the race, the crowd, running through the boroughs.  You really get a feel for NY running that race.  It seems like all of NY comes out for that race and welcomes you.  At about mile 18, when I was about to cross back into Manhattan from da Bronx, a female preacher was out blessing everybody and signaled to me that she would say a prayer to give me strength to finish the race.  I was touched in that moment and it gave the me the strength to make it to Central Park to the finish line. Thinking about it still gets me emotional.

Lois:   I have to say NYC Marathon for a number of reasons.  First, NY is where I was born and raised.  Many years before I was interested in running, I supported the race as a volunteer.  I remember being stationed at mile 26 in Central Park with my rain gear.  My role was to make sure bandits did not jump in to try to cross the finish line.  Fast forward to many years later and I was talking about trying to enter the race through the lottery.  James and I decided we would both enter the lottery and if either of us got in, we would run the race.  If you recall, 2009 we were in a deep recession.  The following year, 2010, we both submitted our entries.  We chalked it up to the recession that a lot of people from our region were not entering the lottery and we were both selected.  We made our arrangements and traveled to NY.  That was the largest expo we ever attended.  We made our way all around NYC, I was a pretty good tour guide if I must say so myself!  On the day of the race, we got up early, took the ferry to Staten Island and I bought a pack of oatmeal cookies and a cup of oatmeal…I was so hungry and the race hadn’t even started.  We were in the last wave, the cannon blew and NY, NY was playing and by the time we crossed the Verrazzano-Narrows Bridge, I was starving and said, I didn’t think I would make it.  James would not take stopping as an option and pushed me to keep going.  All the way through Brooklyn and into Queens, I started eating my oatmeal cookies that I bought at the ferry terminal.  I accepted pieces of bagels from spectators, orange slices and just kept moving.  By the time we crossed the Queensborough Bridge, I was like a new person, ready to tackle the rest of the course.  I will never be able to thank James enough.  He helped me through and I am eternally grateful!

What race did you learn the most about yourself?
James:  For me it was the LA Marathon in 2016.  I ended up with blisters on both feet at mile 16 because I accidentally wore brand new socks.  I learned that I had the strength and fortitude to push through the pain of my feet, that was with every step and complete the last 10 miles.  It made me realize that after persevering for those 10 miles that I can do just about anything.

What is your favorite part about running and traveling?
James:  For me it is the vibe of being around other people that love running as much as I do and seeing the city the race is held in. For the traveling part, meeting so many people from different backgrounds, professions, cultures.  We all have at least one thing in common, the love of running.

Lois:  My favorite part about running and traveling is that it lets me do the two things I love the most.  I don’t have to sacrifice one for the other.  I get to see the world and meet so many fantastic, like-minded people.  We have a small group of friends, aka Roadies, who have gotten along well enough to plan our adventures together.  It’s a beautiful thing!

Lois:  If you ever have the chance to run the Traverse City Marathon/Half Marathon, do it.  That race has some of the most beautiful scenery.  You run along he peninsula as the sun rises.  Almost all downhill.  The race sells out in less than 30 minutes so if you can get in, go for it!

What word would your friends use to describe you?
James:  Adventurous, because I am always doing something or talking about doing something that so many of my friends would never consider.  Whether I am traveling, trying different food or experiencing a different culture, I am usually all in!

Lois:  Adventurous is the word my friends use to describe me.  Scuba diving, marathon running, cruising across the Drake Passage…yep, adventurous for sure!

The COVID-19 pandemic has thrown a wrench in many race and travel plans.  What are you doing to stay healthy?
James:  To stay healthy, I have been keeping up with my training with on line programs, virtual yoga classes and cycling using an indoor trainer.

Lois:  I have been putting the miles in walking outside in the heat and humidity.  We’ve participated in a few virtual races, including a Spartan Sprint, which was fun.  I’ve tried to focus on nutrition with James cooking most all of our meals, with an occasional take out meal.  We’ve also continued meatless Monday.  At some point, we will head back to the gym, but not yet!

What is one positive outcome you have experienced during this time?
James:  I’ve learned stillness.  I can be still and quiet.

Lois:  I know that I don’t have to have a race coming up to motivate me to keep moving.  Having that goal race is awesome, but not essential.

Any advice to runners on keeping motivated when preparing for a race that may or may not happen?
Remember that one day, people will be able to gather and we will be able to celebrate our passion for traveling and running.