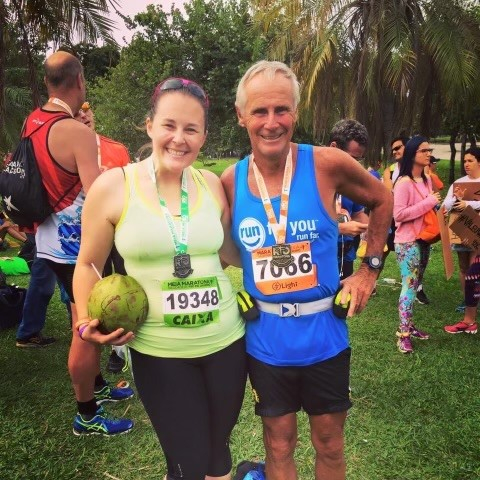 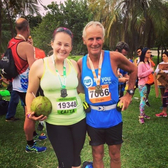 What made me start running?
Actually it wasn't my idea to start running.  The company I worked for in 1982 had a team entry for a United Way Corporate Cup Challenge 5K. All the managers, which I was one, were told we would be running.  It didn't go well, but it got me thinking, I better get in better shape.  It took a couple years but I got to enjoy it and got pretty good at it. I ran my first marathon in 1985 and have been running them ever since.

When and where did you decide that you were going to run a marathon on all seven continents?
It was September 2014 right after finishing the Berlin Marathon. An opening for 2015 Tokyo was offered by Marathon Tours & Travel, and I decided to continue the quest for the six majors.  After Tokyo, my daughter Kristen convinced me to do Rio de Janeiro later in 2015, which got me my fourth continent.  At that point, I wanted to get all seven continents as well as the majors.

How do you stay motivated through all those miles?
Once I got a good base established, it was easy for me to run long distances. It was fun and I looked forward to seeing how far I could go and how many races I could finish. As I ran more, I got faster and placed well in races, especially ultramarathons. Now signing up for races, gives me motivation to train.  Also, I lead a marathon/half marathon training group and that keeps me accountable to my own training.

What is your favorite race and why?
Marathon: Boston.  The history, the Boston support, challenging course and the fact you need to qualify to run it. I have run it 22 times so far.
Ultramarathon: Western States 100 Miler. It is the most prestigious of all the USA 100 milers. I was fortunate to finish it 12 times of which six were top 10 overall finishes.

What race did you learn the most about yourself?
1994 Badwater 146 in Death Valley California.  It is run in July and the temps are over 110F so it is quite hot. It was my longest race distance wise. I went to win the race, but we had a logistical issue with one of my support vehicles being late and ran out of water two-thirds of the way. Ended up in third, however given the physical issues (dehydration) I had, I was happy. Overcoming those challenges (heat, distance, terrain and dehydration issues) was hard, however it taught me I could push through any race.

What is your favorite part about running and traveling?
Seeing new places and meeting many wonderful new running friends.  Many times, it is a family trip with my daughter Kristen or son Mike joining me. Fun combining my passion for running, seeing new places, meeting new friends with family.

It doesn't have to be a race. bit what is my favorite place/city to run?
Sierra Nevada Mountains in California/Nevada: Yosemite, Kings Canyon and Sequoia National Parks trail running with friends. Absolutely beautiful.

What word would your friends use to describe you?
Determined

Please share any other fun or interesting fact about yourself.
Running has given me so many rewards, I wanted to give something back to the sport I am so passionate about. Fourteen years ago, I started a a training group for adults who wanted to run either a full or half-marathon. The program has grown and now in the current training session, there are over 300 runners in training and racing marathons or half-marathons all over the country and world. It is so rewarding to see the joy when they cross their finish lines. In the twilight of my running career, I am still living my passion through these runners.