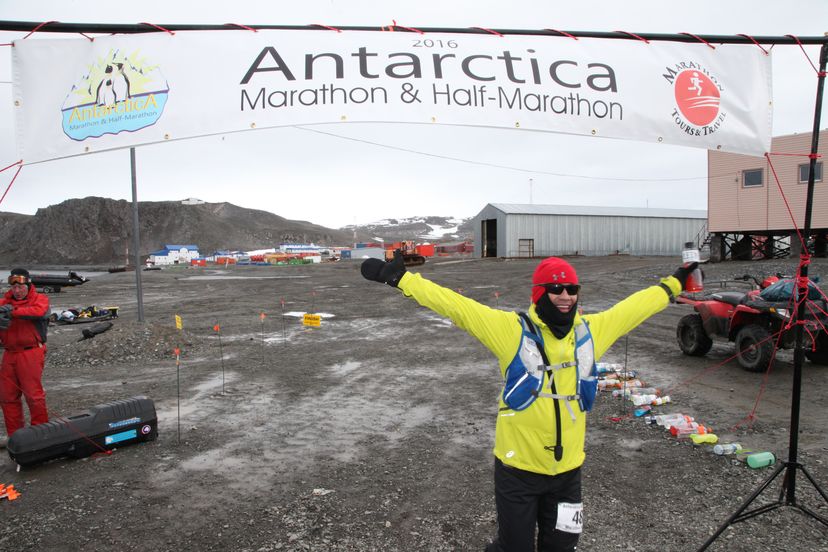 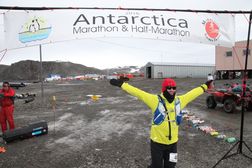 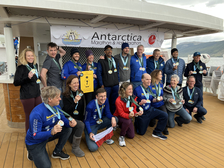 What made you start running?
I started running to get in better shape and reduce stress, and ran my first half marathon in 9/2012.  During the run, I met a few runners who were part of Marathon Maniacs and that inspired me to start training for a marathon in 2013.  I ran my first marathon at the age of 42.

When and why did you decided to you were going to run a half-marathon or marathon on all seven continents?
I remember I was on a plane in 2014 reading a Runner’s World magazine and read an advertisement referencing the Great Wall Marathon. I knew I was heading to Beijing in a few months later for business  and thought, I wonder if I will be there during the marathon.  I also read in that magazine about the 100 Marathon Club, the Abbott World Marathon Majors, the 50 States Marathon Club, and the Seven Continents Club®.  After a few emails, etc. and a change in flight schedule, I registered for the Great Wall Marathon.

Later that month after completing another half-marathon, two full marathons and meeting a few more Maniacs, I caught the bug.  I decided at the time, I would complete the following by the age of 50:

How do you stay motivated through all those miles?
I listen to music, attempt to conversate with other runners, and grind out the miles one mile at a time.  And believe me, I hate every minute during the races, but feel satisfied when I cross the finish line.  Also, receiving support from other runners and cheering other runs on also keeps me motivated. I remember running a marathon in a small town in Fussen Germany where I was one of a few international runners.  Most of the runners did not speak English.  But I learned quickly the universal thumbs up and smile from other runners reinforced the common desire to finish the race.

How many marathons and/or half-marathons have you run?
I think I’m around 110 marathons, 75 half marathons

What is your favorite race and why?
I enjoyed them all, but I really like the Sydney Marathon as I had always dream of visiting there and being able to see the Sydney Harbor Bridge at the finish.

What race did you learn the most about yourself?
The three most challenging races for me were the Uganda Marathon, Sierra Leone Marathon and the Great Wall Marathon. All three had temperatures, humidity, and hills or climbing like I had never experienced before. I did not want to return home with a DNF.  I therefore had to dig it and push myself like I’ve never pushed myself to finish these races.

What is your favorite part about running and traveling?
My favorite part about running is staying in shape and visiting all part of the US and other parts of the world.  And meeting runners from all of the world with the common goal of finishing.  And the Maniacs, that’s another group that will push you.  I never imagined I would run four marathons back to back until many of the Seattle Maniacs forced (lol) me to run the Seattle Quadzilla, which was four marathons in four days over Thanksgiving weekend.

It doesn’t have to be a race, but what is your favorite place/city to run?
I enjoyed all of the cities, but really enjoyed the Chicago Marathon and Tokyo Marathon.

What words would your friends use to describe you?
Committed, positive, like to have fun during the races...I could add more.