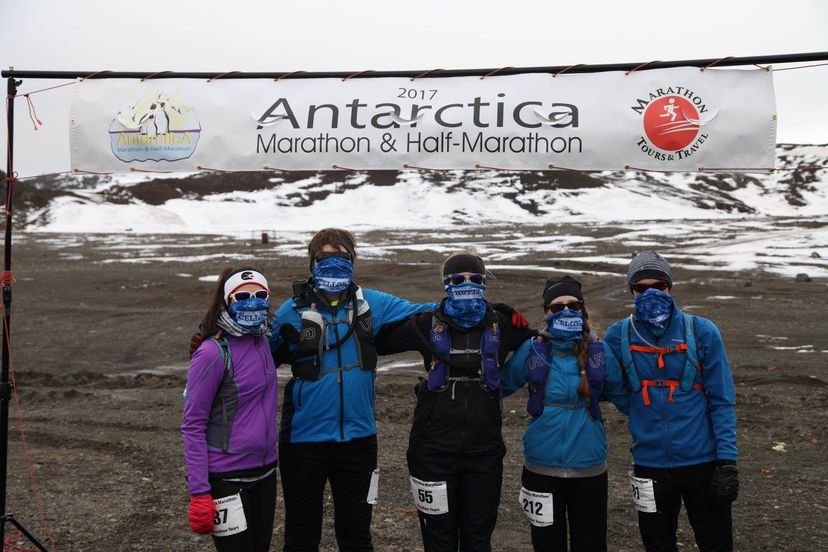 What made you start running?
I honestly don’t know why I started running. I think it had something to do with seeing my brother and dad out running and enjoying themselves, so I decided to try it myself. I’ve never been sporty (I lack the coordination), but running was something that came naturally to me. The feeling of accomplishment, combined with being able to eat more cookies from calories burned, really appealed to me.

When and why did you decide you were going to run a half-marathon or marathon on all seven continents?
A friend and fellow SCC member (Brianne Harding) saw an article about the Antarctica Marathon in a magazine. She sent the article to me and her husband (SCC member Thomas Bollmann) thinking that if she convinced us to do it, she would get to come along on the trip. Unfortunately for Bri, we have made her participate in the running in addition to the travel and haven’t looked back since.

We also convinced a few other friends to join us on the Antarctica journey, one of whom is my now husband, Ben. When we signed up for the 2017 Antarctica Marathon in 2014, we weren’t even dating yet. In the three years it took to finally depart for the last continent, we started dating and on our last day in Antarctica, Ben proposed. On the ship journey back to Argentina, we got it into our heads that we should get married right away; we were in international waters and a ship captain that could officiate the ceremony. We took the plunge and had a ridiculous runaway marriage at sea.

It later turned out that marriages at sea aren’t legally binding, so we made it legal a few months ago in Calgary. But the memories we shared in Antarctica were unforgettable, and never would have been possible without the decision to run on all seven continents in the first place.

How do you stay motivated through all those miles?
Sometimes it is the thought of cookies and pizza, but it is mostly the amazing group of friends I have that are always there for a great conversation that keep me going over many many miles. They inspire me, make me laugh, and keep me excited to go for a run – even when I am tired and it is -20 degrees outside.

How many marathons and/or half-marathons have you run?
At the time of writing this, I have run 12 marathons and have plans to complete three (3) more this year. I stopped counting the half marathons a while ago because I run them in training almost every weekend. There have been too many to count.

What is your favorite race and why?
By far, my favorite race is the Banff to Jasper Relay. It is a 15 stage / 260 km race that is run through Canada’s Banff and Jasper National Parks. There is nothing quite like the team camaraderie that the race inspires, and you really can’t get a better view on a race than this one. Ben and his sister Amy put a team together and we run it every year.

What race did you learn the most about yourself?
The Chicago Marathon was a great experience for me. I didn’t have a particularly good training cycle for Chicago, and I went into the race without any expectations. I ended up with a PR and learned that sometimes you have to let go of your expectations in order to achieve the unexpected.

What is your favorite part about running and traveling?
On their own, running and travelling are two of my favorite things in the world. When you add them together, you get a unique experience because running is an inimitable way to see a new place; racing or otherwise. When you run, you get to tour around a city much faster than you would on a walking tour (which means you get to see more). And in races, you get to go places where normal tourists don’t go. For example, they shut down the Auckland Harbor Bridge and send runners across it during the Auckland Marathon.  It is a great view that no one else can see because pedestrians can’t normally access it.

It doesn’t have to be a race, but what is your favorite place/city to run?
I love running in my hometown of Calgary, Canada. We have the largest network of maintained pathways in North America (over 850 km), and a lot of these paths go through some incredibly scenic wild spaces.  One of my favorites is the Glenmore Reservoir loop. The vistas of the water, trees, and mountains in the distance never seem to get old. It also doesn’t hurt when I run into moose, deer, beavers, or the friendly faces of other runners while I’m at it.

What word would your friends use to describe you?
I asked them and I got quite a few words back; adventurous, crazy, inspiring, determined, food-motivated, and globalrifficboozerunner. I’m very lucky to have some pretty amazing friends.

What words of advice would you give to someone who is training for their first marathon or half-marathon?
Take it easy, enjoy it, and have a plan for how you are going to celebrate your amazing accomplishment!