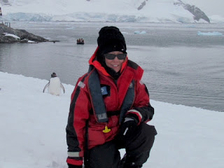 I enjoyed watching my son Daniel and daughter Liana running around playing sports when they were young – I was happy for them that they had this opportunity because I never did.  There weren’t organized sports for girls when I was young.  But, in addition to watching them, I was also the snack mom, and I sampled too many of those snacks!  For the first time in my life, I was no longer skinny!  I stopped eating the kids’ snacks and asked my husband Larry to go out and walk with me after dinner.  He walked SO fast that I had to jog besides him to keep up with him.  Larry saw me jogging and he started running.  So I had no choice but to run if Larry was running - I wasn’t going to let him get away!  Then we started entering 5K races and I was hooked.  I loved the feeling of running, it felt so good and I felt like I was carefree and young again.  And I loved the competitive aspect of the races, running as hard as I could and crossing the finish line with nothing left.  My 5K’s led to two half marathons, then I began running marathons.

It was a joint decision between me and my running buddy, Sheri Bush.  Sheri and I were the first two American woman to run all Six World Marathon Majors when we finished the Tokyo Marathon in 2013.  We had a wonderful time running the Majors.  To keep this party going, Sheri announced that since we already had three continents finished with the Majors (North America, Europe, and Asia) we should finish the other four continents and become members of the Seven Continents Club.  I agreed and we were off to the races!

I have been very sick twice and both times running helped me get well again.  When I run marathons I see people with all kinds of challenging physical conditions.  For example, I have seen runners who are blind, without legs, without arms, recovering from cancer and other diseases – running, and finishing marathons – so it is very easy for me to keep going.  If they can run, so can I.  I am so grateful to be healthy enough to run.  Every mile is another gift.

My favorite race is the Boston Marathon.  It’s every marathoner’s holy grail.  It’s our Olympics.  I was thrilled to be able to qualify three times for Boston, and to run it twice, in 2011 and again in 2014.  For me it represented lots of hard work to be able to qualify for the oldest continuously run marathon, and arguably the most famous marathon with a tradition that I am so proud to be a part of.  The first time I ran Boston, it was more of a personal victory for me.  The second time, the year after the bombings, it wasn’t about me; it was about all of us runners taking back the marathon from the terrorists and making it just about the marathon.  The crowd was screaming “USA, USA” the entire time we were running.  That was a race of a lifetime.

After running my first two marathons, with a PR of 4:31, my running coach, Doug Butler, said I could run a sub-four hour marathon and get a Boston Marathon qualifying time. In 2010, I needed a 4:05:59 to BQ.  I listened to everything Coach Butler said about how I should train and I did it.  I picked a very fast marathon for my potential BQ race, the Mohawk Hudson River Marathon in upstate New York.  I treated it like a business trip – I flew up there by myself, and ran the race like it was my job.  I put every other thought out of my head during that race and just kept going at my pace, average 9:10 minute miles.  Even though about midway through the marathon, many other runners, and I, were stopped by a train going by, an official from the race was there and kept track of how long we were stopped, and our time was adjusted a few hours after the race.  When I finished, I was so happy I was crying.  I saw 4:00 as my finish time.  As happy as I was, I still wanted to be under 4 hours like Coach Butler said I could do.  And I was – when the time was adjusted, I got a 3:59:12!  I learned if I listened to what an expert said I could do, did all the training, was lucky with the weather, and just kept running at the proper pace, ignoring everything else (except for that train) I could accomplish a very difficult goal.

I love traveling to different cities and seeing all the sites.  But the favorite part about running and traveling is meeting new people.  My new running friends are instant best friends and I love spending time with them all over the world.

There is no better place to run than Tropical Trail, in Merritt Island, Florida, which happens to be the street where I live.  It is a palm tree lined street bracketed by rivers on either side.  My friends and I run while the sun rises, dolphins and manatees are swimming in the rivers, and the smell of the blossoms from mango and orange trees is in the air.  We can run outside with one layer of clothing on twelve months a year.  The Trail is a runner’s paradise!

Optimistic.  I always try to look on the bright side of everything.

Do it!  It is a great feeling to cross that finish line!  But don’t do it alone.  Join a running club and get a running coach to help you train.  Run with your new friends every week.  Run with them in marathons.  Run when you are on vacation.  Run, run, run for the rest of your life!