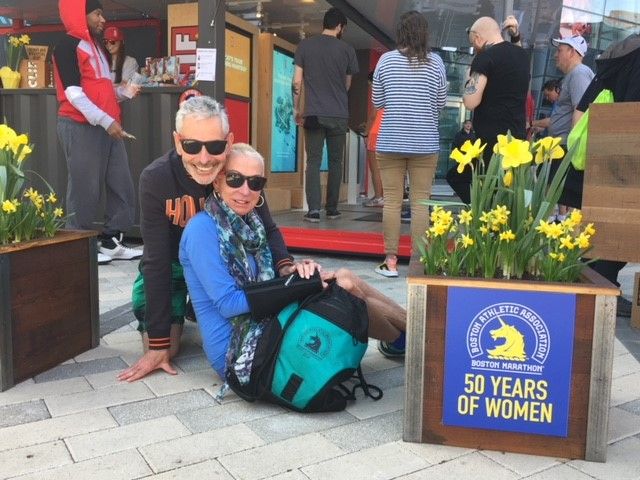 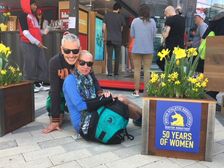 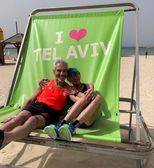 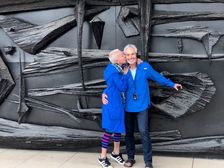 What made you start running? Alyn: My first race ever was the 1981 spring Denver marathon. A professional colleague had recruited me to join his group and I naively agreed. Really had no idea for what I had signed up to do. Up to that point had been ‘jogging lite”.  It was a life changing experience.

Jay: I was writing my Ph.D. thesis and sitting for hours in a library correl.  Needed the exercise!

Our relationship with Marathon Tours & Travel (MTT) began in 1992 when we were in Athens, and met Thom whose marathon group was staying there. He generously invited us to join his group for logistics, food and fun. Subsequently, we did several trips through MTT, but did not become aware of the Seven Continents Club until the Millennium Marathon in 2000; when at the celebratory dinner many runners were honored as members. The journey began.

We both think of all the people who are not as fortunate as we are to be blessed to “run and savor the marathon experience”; especially at our age. We do not take it for granted!

Half marathons: OMG, no idea!

What is your favorite race and why? Domestically, hands down, Boston for both of us.  Jay ran it for the first time in 1986 when Rob DeCastella set a course record. He has run it 11 times since; and finds it unparalleled in terms of history and tradition. He finds the crowds the best of any marathon. The course is their home and they relentlessly cheer you to the finish as their guests.  For Alyn, it marks the day Katherine Switzer completed the 1967 Boston Marathon (despite the attempt to pull her off the course by a race official); opening the doors of running for women and their daughters around the world.  Those who ran Boston in 2013 and 2014, it is indeed, “A Day of Remembrance’, forever embedded in our heads and hearts. "One Boston Day” is revered. Internationally…oh my, do them all! But do get Antarctica on your schedule!

What race did you learn the most about yourself? Comrades, the ‘Ultimate Human Race’. A brutal, wildly popular race that historically helped to shed a light on the apartheid-era in South Africa. It is the world’s oldest ultra-marathon, 89K, often referred to as the race of ‘ubuntu”.  In Zulu “ubuntu’ translates into “humanity toward others”. Running this race represents the universal bond of sharing.  In 2009 Jay cramped two miles from the finish line and earned a DNF. The experience was devastating.  He/we went back in 2010 and he successfully completed the race.  Jay’s words: “I travelled 10,000 miles to finish those last two miles and complete my goal.”  The spirit of the CM  is said to be embodied by attributes of camaraderie, selflessness, dedication and perseverance. WE EXPERIENCED THIS. . What is your favorite part about running and traveling? Meeting new people; learning about the world and different cultures. Affirming that we are  a world more united than divided. It doesn’t have to be a race, but what is your favorite place/city to run? Run anywhere, everywhere! Berlin, Prague, Barcelona, Mykonos, Shanghai…. It is how we navigate and learn a city/country.  One night in Hanoi we ran the streets with our guide, dodging motorcycles, bicycles, and cars; trying to get across streets where people were lined with their nightly rituals of eating, cooking, selling wares and enjoying family.

What word would your friends use to describe you? Grateful and optimistic

Philosophically: 1. From Mina Samuels, author of “Run like A Girl”; Our running shoes have magic in them. The power to transfer a bad day into a good day; frustration into satisfaction, self-doubt into confidence, chocolate cake into muscle.

2. If you want to change your life, become a runner.

Practically: Do Not Go Out Too Fast!