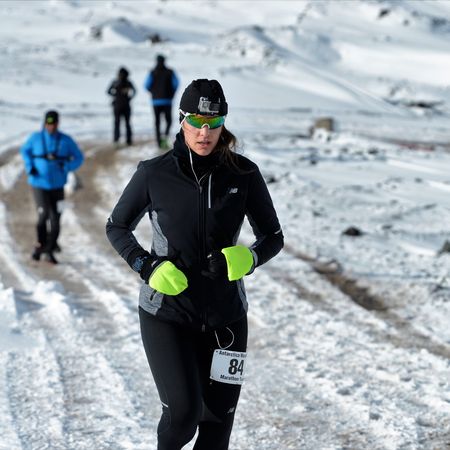 Called by Runner's World as "Running's Greatest Adventure". Marathon Tours & Travel has been offering the Antarctica Marathon & Half-Marathon since its inception in 1995.Learn more

Called by Runner's World as "Running's Greatest Adventure". Marathon Tours & Travel has been offering the Antarctica Marathon & Half-Marathon since its inception in 1995. Sells out three years in advance. Learn more

Since we are not able to physically go to Antarctica in person this year, we have created a virtual experience with you specifically in mind! This special event will bring together alumni, future travelers and our global running community. Read more

Today's Tuesday Teammate Spotlight is on Liz, our Pastry Chef on board one of our 2018 Antarctica ships. Liz quickly became a client favorite before anyone had met her with her delicious baking skills. We finally met Liz when she came out of the kitchen and asked us if she could participate in the Antarctica Marathon to commemorate her last Antarctica cruise. Read more

Imagine running a 13-mile course in crisp temperatures between 15 F and 34 F minus the wind chill and against 35 mph winds while maintaining your footing along the muddy terrain, all for the sake of saying you “did it.” You may ask why someone would aspire to complete such an onerous task voluntarily. Carmel residents Dr. Matthew and Holly Abbott share why they chose to make the voyage to Antarctica and what they have taken away from this unique and truly awesome experience only a small percentage of humans are willing and able to accomplish. Read More

Nick Pacha, Superintendent of Parks for the City of Washington, said running is something he has only recently gotten into. “I did kind of every sport in high school and played football in college,” he said. After college, Pacha picked up running as a new hobby and eventually worked his way up to run his first marathon in Chicago in 2006. He ran the Chicago Marathon again in 2007 and 2010 before finding a company, Marathon Tours and Travel, that did destination marathons. The founders of the company are also the founders of the Seven Continents Club, an exclusive group for people who have the goal to run marathons or half-marathons on all seven continents. Read More

Thanks for the update and all the work you are doing. I can't begin to image the logistics issues you are having to deal with right now. Thanks so much.

Thank you and everyone at Marathon Tours for taking all of these curve balls and handling them like champs. I love that I haven’t had to worry about my Antarctica trip in the midst of the chaos. Looking forward to 2021.